THINGS MOVE ON APACE .11th May 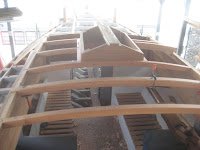 This was the view as we began the day.

The epoxy resin arrived via the harbour master's office.
So the two Daves set to with a will ! Gluing everything in sight, as we have been waiting for its arrival for some time. 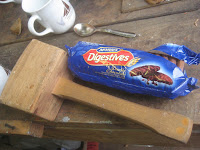 A new volunteer arrived to swell the ranks. 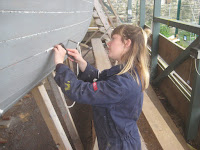 Sally Fishlock arrived bearing gifts !
She is to begin a marine design course at Llandrillo College in September.

Wednesday Phil offered her a cup of tea after her journey, but she declined 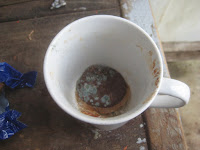 stating she preferred a healthy option which she had brought with her.(You can't please some people!)

After a brief training session, she began caulking and took to it like a duck to water.We now hopefully have two caulkers on Wednesdays.She worked all day without complaint..... 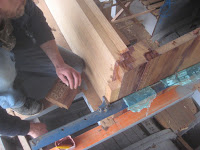 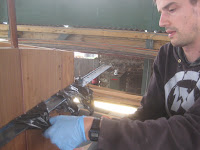 While apprentice Dave tackled the starboard (right). Note the plastic inserts to stop glue attaching to the clamps. 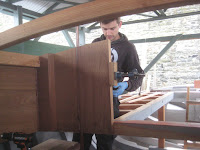 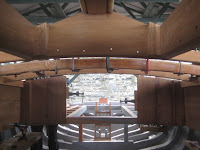 West epoxy is a great invention.

At dinner time we decided to re-enact the epic journey of Shackleton who hauled his boat across the ice floes of the antarctic to save his colleagues .We used a boat which was now in the way within the compound to what we thought would be a trailer outside the gate.Alas no way! 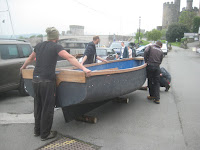 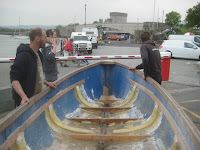 Finally we ended our expedition leaving the boat in the parking area with generous contributions to the swear box. 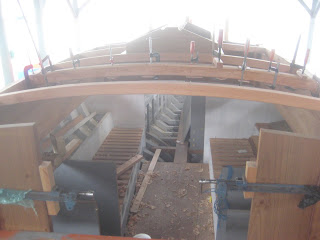 This was the view as we left today.