THE CAULKING IS COMPLETED  AND MURRAY  SHOWS ANOTHER SKILL !

As Wednesday Phil has been on an all expenses denied observation of boat building  in Tenerife, the Daves have continued caulking and filling over this with red lead putty mix.. The hull is now waterproof except for the prop shaft (which drives the propeller) hole  through the hull.

The metal frame to hold the rudder has returned after being galvanised.
And a local metal worker from Penmaenmawr has been to make patterns for the fittings to support the rigging.

Today Shipwright Dave finalised the keel boats which hold the heavy ballast casting (big lump of cast iron) to the keel .This stops it moving inside the hull during rough weather .

Wednesday Phil   and Dave managed to move the engine to the side of the hull to allow the floor to be lifted to finish the bolts. 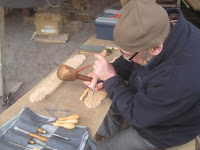 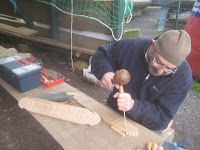 Then Murray ,one of the trustees, arrived to continue carving the name plates for the boat.
One of his hobbies is carving detailed and intricate designs.


This attracted many observers who were keen to see the methods employed. 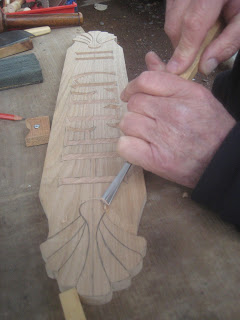 Wednesday Phil was fascinated to see the many processes employed to sharpen his tools to a razor sharp condition.


Murray sadly declined my invitation to carve a sign for

Posted by Wednesday Phil at 12:41 No comments: