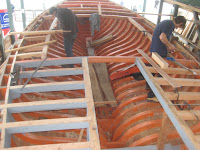 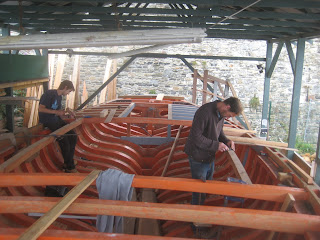 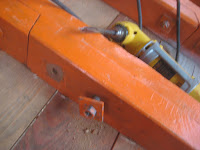 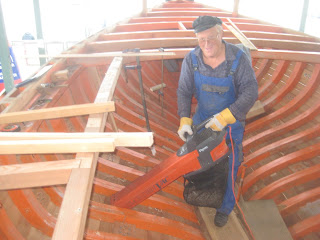 Posted by Wednesday Phil at 09:32 No comments: 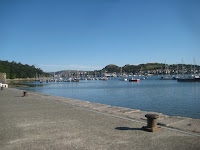 Another  busy day from the office window.What a view ! 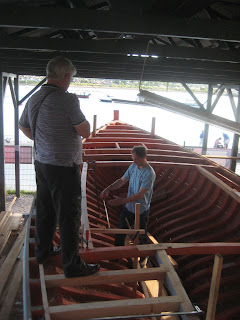 Discussions began with Tony Mead and shipwright Dave with a view to sorting out the internal bulkheads (walls ) and fittings. 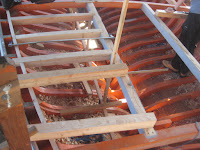 The half beams support the deck up to the sides of the cockpit which crew stand in. 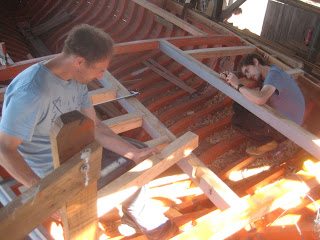 Apprentice Dave works on fitting half beams to the opposite side of the cockpit.(this is probably not the right word ) 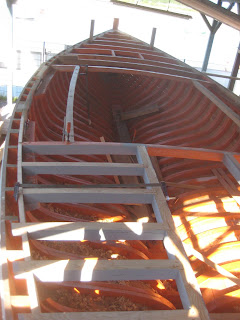 The half beams are painted and in place.They are made from 3"x 3" oak beams.
She is built to last ! 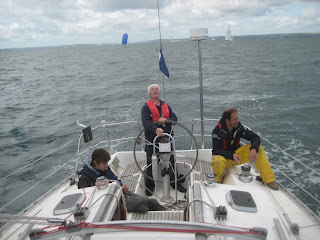 Then we all did a bit of team bonding, racing Tony's boat in the first race of the river festival.
Wednesday Phil was sent to the pointy bit to photograph the hard working scene while holding up the jenny boom.
We came second after a lot of shouting from Capt. Tony and beer ! 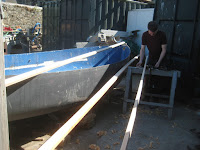 Meanwhile volunteer Duncan practices the skills he has learnt on Helen II to fit gunwales (upper edge of boat's side ) to an 18 foot hull in need of repair.


THERE WILL BE AN OPEN DAY ON SATURDAY THE 22 nd AUGUST  ON QUAY DAY.
This will be a chance to see the work in progress.Come and view........for free !
Posted by Wednesday Phil at 13:55 No comments: 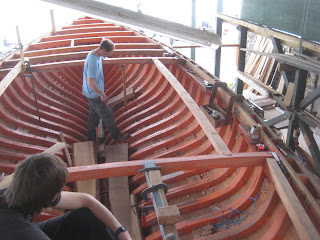 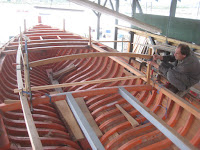 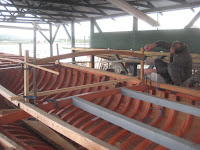 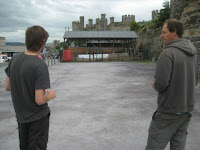 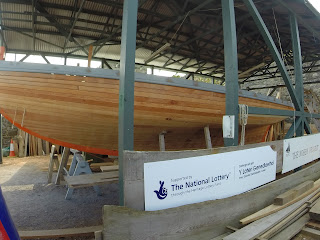 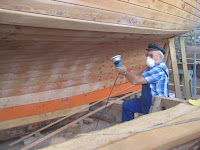 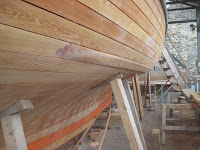 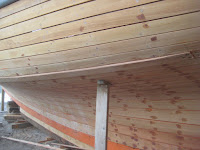 
And congratulations to apprentice Dave who returned this week after the birth of a daughter. He's come back for a rest..........
Well that's what he told me !
Posted by Wednesday Phil at 11:49 No comments:

Shipwright Dave finishes the counter around  the stern. 29th July 2015 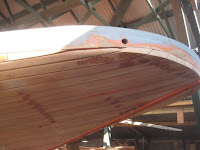 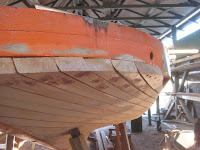 The end joints on the outer planks were particularly difficult to twist into place without lots of G clamps. 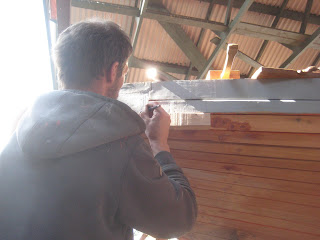 Although Dave is still not happy with the fit ,he can  tweek things at his leisure now to achieve a finish to his satisfaction. 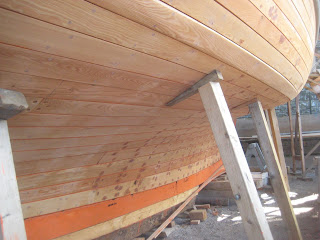 While Dave worked on the stern ,  Wednesday Phil continued epoxying over the nail and screw heads so that the hull will be as streamlined as possible.( I've given up counting how many fill ins  Pat and I have done.)
With the circular sander now repaired,we fine these down to make the hull as smooth  as a baby's rear end !


Posted by Wednesday Phil at 13:54 No comments: