HERE'S WHERE YOU COME IN --- HOPEFULLY !

If you have enjoyed our weekly blog on Helen II or eagerly await each weeks ramblings to hit your screen ,you can help keep the project alive with modern technology.
We have now created a donations gizmo to allow our followers to donate painlessly from the comfort of their armchairs via a 'phone text message. 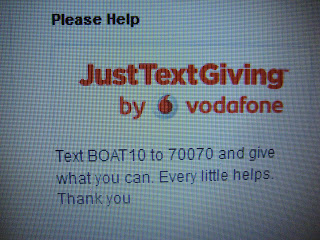 I have no idea how it works,but you can test the system yourself to check it does !

SO WHY HAVE WE DONE THIS ?
1. We are sadly short of funds and every donation helps keep us afloat.(see how I did that ?)
2.We tend to get small change in the collection buoy and I have to count it.It takes ages !
By this extra method I hope we can get donations rounded to pounds.
3. I have little use for zlotys, euros or steel washers.

So if you want to help us easily and hygienically please bang away on the buttons and give as you see fit !
End of slick begging advert.

Today shipwright Dave finished one half plank for the port (left ) side and made a  pattern for another .Wednesday Phil began the task of sanding down the starboard (right) side of the hull to give the planks a smooth finish. All the visitors stopped to admire our handy work whilst visiting a Celtic Fair on the Quay .

Our work was sadly hampered by the arrival of Robin Leach a director working for BBC 2 who thinks the project may be included in a program on T.V.
The fight for control of the mirror was unseemly......
Wednesday Phil gave a rousing rendition of " alas poor Yorick I knew him well !"
whilst keeping a vice like grip on the comb.
Shipwright Dave grinned for the camera !
Posted by Wednesday Phil at 13:16 No comments: 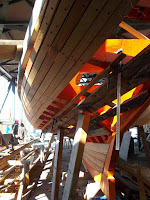 THE PORT SIDE PLANKING CONTINUES 20 th May 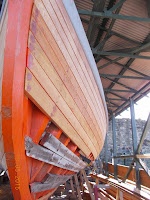 Shipwright Dave continued adding another half plank to the port (left ) side of the hull and created a pattern for the next bow section.

But apprentice Dave had to leave at 10 am for an exam on " The Principles of Boat Building Technology".
When he returned ,he announced, he scored 87.5 % in the test. We pointed out he was 2.5% down on the previous sitting not to mention half a plank down on the day !
BUT we did congratulate him on his result. 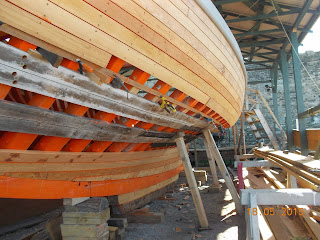 He set to with a will and a big grin and   completed a half plank by Wednesday close.

Tony Mead informed us that a producer from BBC 2 is coming next Wednesday to look at the project .
So Wednesday Phil is off to the shops to purchase an "Elvis" bib and brace overall and some gold rigger gloves......
not that this will go to his head !

Posted by Wednesday Phil at 14:47 No comments:

THE STOP PLANK FINISHES THE STARBOARD SIDE 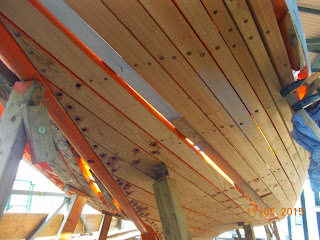 Due to the arrival of a delivery of new larch slabs , shipwright Dave was able to continue with the final quarter of the stop plank which closes the planking gap on the starboard (right) side.

Now this side's planking is complete ! 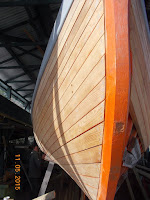 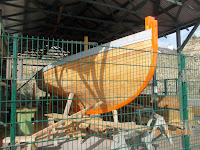 All the visitors who passed by yesterday stated the boat now looks like a work of art and the progress was clear.
One quote was "Isn't that beautiful.Just look at the sleek lines and the streamlined shape !"
I thanked him for his comments and then asked him what he thought of the boat.
I believe that got us a generous donation.

Meanwhile apprentice Dave went to Llandrillo college to sit an exam in health and safety in ship building.He came back pleased as punch to announce he scored 90 % in the level 3 exam.
After questioning by shipwright Dave and I, we were all unsure as to what this exam was a part of  and indeed  how many parts were involved in obtaining a complete  level 3.We decided not to ask how many levels come after level 3 as confusion threatened to set in !
But congratulations anyway ! 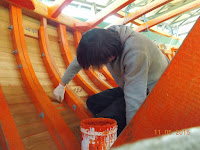 Apprentice Dave then got back to work butt jointing (joining ) the sections of the final plank together--- as described previously. 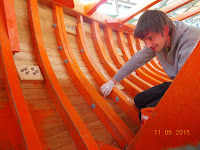 And volunteer Pat brought two of her friends to see the boat and explain her work in the scheme of things ....
BUT most importantly she brought cake  !!!!!!
Cheers Pat.
Wednesday Phil then had to go and stand in the naughty corner as, while cutting  a plank of oak,,the band saw blade broke with a loud report and sparks which almost made me give a similar  donation to the project !
Shipwright Dave just grinned........


Posted by Wednesday Phil at 12:59 No comments: