AN UPDATE SINCE LAUNCH 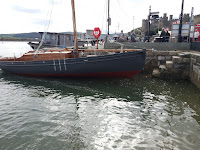 Helen II is now berthed next to the Liverpool arms on the quay.

Wednesday Phil and Wally have been busy creating the rigging parts 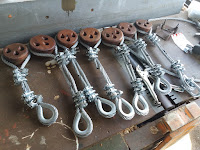 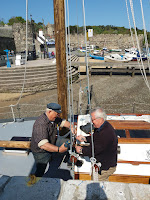 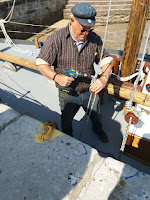 These were then fixed in position on the boat and connected to the rigging wires. This proved difficult and a two person task.

Aled ,Mike  and Leo came from Llandrillo College to help load the anchor ropes and chain into the boat with Ron guiding the coiling. 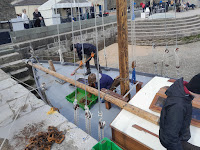 This was followed by half a ton of chain ballast to trim out the boat. 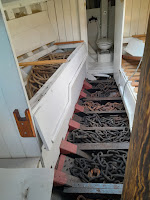 Since the launch ,Helen II's planks have started to swell in the sea water and as they expand ,the vessel becomes more water tight . At first when the pumps were turned on each day by Phil , a continuous run of water lasted 15 seconds. Two weeks later the flow lasts about 8 seconds .Those in the know think this is very good

Two of students returned the following week and swabbed the decks of seagull pooh , tweaked the skylight closing fittings and reorganised the ballast chain. and they were still smiling !

Posted by Wednesday Phil at 14:00 No comments: