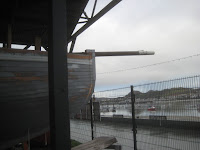 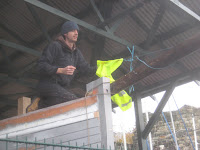 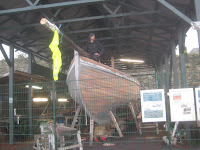 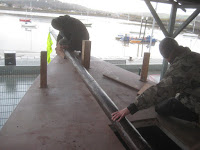 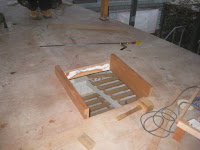 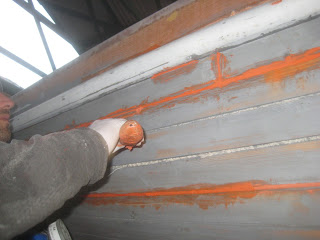 Posted by Wednesday Phil at 12:16 No comments:

LAST CHANCE TO GET THE ENGINE ONBOARD

Due to the storage of  bilge keel boats next to the compound on Thursday /Friday, today was the last opportunity to lift the engine into the boat for the next six months.
A hiab was to be used from the bridge contractors to assist, but it was seen disappearing over the cob  at 9 am today. Even the driver was surprised!
Harbour Master Matt  swung (strolled) into action.
Thanks to the generosity of BUCKLEYS CRANE HIRE they provided a lift vehicle  at short notice to assist. 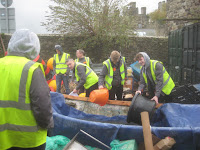 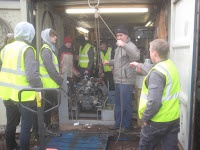 .In order to get the engine out of the shed ,Llandrillo College students practised bailing out  a water filled obstruction first. This is excellent  preparation for the Helen II launch. 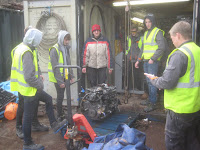 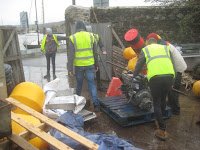 Once a block and tackle was rigged, the engine was lifted out and taken around the compound to the port side of Helen II.
(click on a picture to enlarge)

Baz ,from the harbour office, organized the lift  with the  Buckley's driver at the controls.

The engine was placed on the deck and then lowered through the foot well via a chain winch.

The two Daves then pushed the engine along an angled plank as Baz continued to control the move.

Finally the engine was unhooked and all celebrated with a cuppa !!!
Well that's what they told me !

A special thanks to BUCKLEYS CRANES for making it possible and Baz for his knowledge.

And then shipwright Dave lined up the angle for the prop shaft to enter the hull
with string and his eye..and drilled a pilot hole. 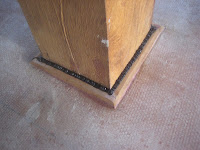 Apprentice Dave finished sealing the posts at the bow.

Volunteer Pat came to do some internal painting and Wednesday Phil supplied moral support and tea.

Posted by Wednesday Phil at 12:31 No comments: 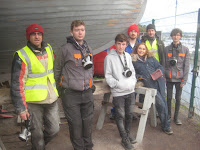 This is today's group of students who worked on Helen II.

This week Ethan, Rory, Kade Kyle,Alex,  Joshua, Callum,Lee,Gary,Corey,Scott, Sally and their tutor Fraser will all work on the boat. 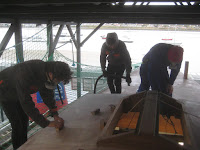 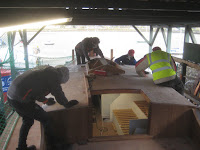 With their breathing masks on, they just needed white body armour and we would have a scene from Star Wars!

We were all pleased to see the energetic work they put in and with the astute direction and  leading by example of  Fraser,  all stayed  focused and on task all day. WELL DONE !!!
(They only got their mobile phone fixes during breaks ) 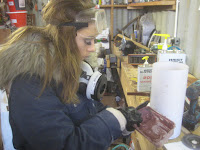 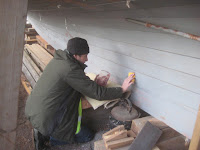 Kade prepared Epoxy Resin with filler to use on final finishing of screw and bolt depressions on the hull. 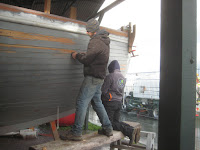 Under shipwright Dave's direction, others worked on fairing in the hull and deck. 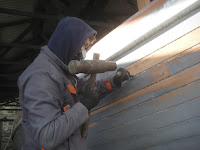 Wednesday Phil directed  caulking practice from his armchair .
They will certainly cut down his workload for the future !!
Whoopee........... 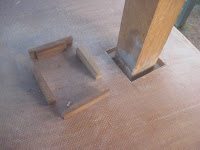 Apprentice Dave  continued making frames around the "timber heads" (two chunks of wood sticking up at the bow end )
Once framed, the inside edge will be caulked and sealed with mastic to stop water leaking into the hull. 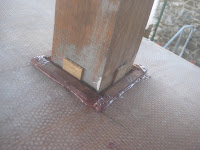 Well that's what he told me ! 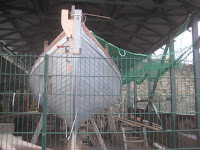 My final view today showing the anchor chain guide template  which will control  the chain and rope at the bow.
Its name escapes me.
Posted by Wednesday Phil at 12:51 No comments: