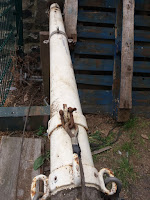 Wednesday Phil has continued to work over the past weeks on jobs that need doing.
An old Nobby mast was purchased as Ron thought it might do for the boom.
Phil was charged with removing the fittings and  preparing it for use.

On removing the fittings Phil discovered  some hidden rot and awaits Ron's opinion on it. 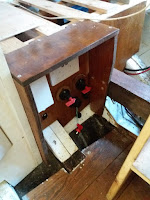 He also made a cover to protect the electrical switches from careless feet. 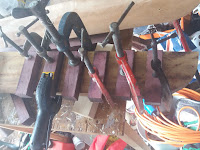 Jeremy had said that when sailing alone, many skippers would drive pegs into the woodwork to hold the tiller while they went to make a cuppa and it would be good if we could do the same .
NO ,NO, NO,!
The wood surrounding the cockpit built by shipwright Dave was too good to damage so Wednesday Phil came up with a plan to save the woodwork. 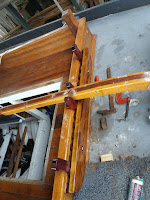 He built a detachable steering board with movable pegs to hold the tiller on a course. 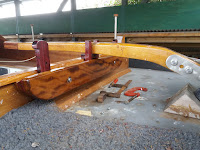 This is bolted to the cockpit  and can be removed when not needed.
It's  very artistic! 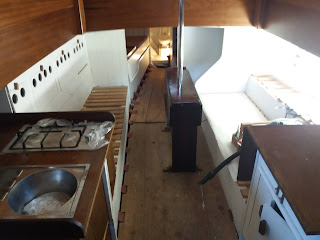 Today's inside view.
Posted by Wednesday Phil at 12:21