ONE WEEK TO LAUNCH , SO A QUICK UPDATE 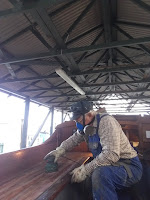 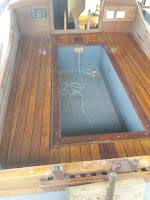 It is now finally finished and sealed for launch. 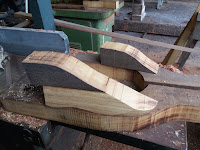 Phil then had to make the jaws (don't know their proper names)to hold the sail  up the mast. As he had no idea how to do it or what they look like so  ,he looked at similar examples on other boats. 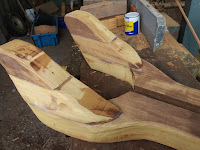 As we had no wood of that shape, Phil had to use three different pieces of wood  glued together with epoxy resin and then cut and shape them to the desired shapes. 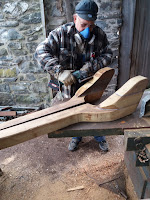 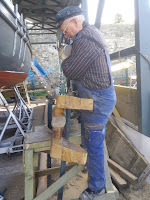 These then were drilled on to the boom ready for bolting and epoxying . 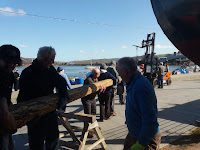 The mast had then to be moved out of the compound to be worked on and it took eight people and a fork lift truck (and a short road closure). Oh what fun was to be all had. 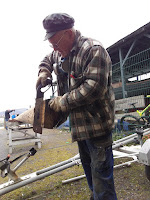 The mast foot had to be recut as apparently it would have been unremovable once it had swelled . 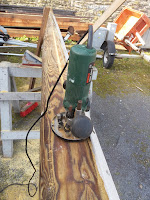 Phil then had to cut a forty foot groove up the mast to house a VHF and electric cable. this will protect them from chaffing from the sail. to do this, guides were fixed along the mast and a router run along the guides. 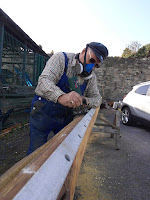 That's another procedure he has learnt ! 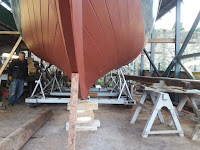 Walley's wagon is now complete and Helen II has been lowered into the cradle and previous supports removed.
She was then moved about three feet  to prove the cradle worked !
Wally was happy with that.
Posted by Wednesday Phil at 15:33