CABIN POSTS LOOK LIKE 3D JIGSAW PUZZLES !
A lot of work goes into some key pieces of the boat. 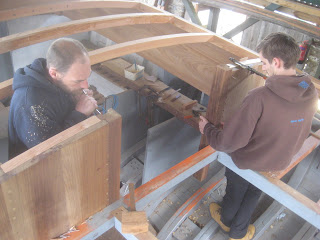 The two Daves set to work on completing the beams to the cabin hatch. 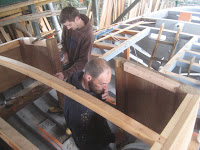 These prove quite complicated in design and it became a matter of measure fit and amend until both were satisfied with the cabin posts. 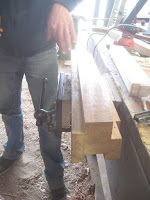 If you click on the photo it will expand to show the detail shipwright Dave has created in this post.


Meanwhile Wednesday Phil instructed Sally in LIMBO dancing whilst holding a caulking hammer. This is a required skill as our caulking runs are now going lower down the hull  and we have to manoeuvre ourselves under the planking around the keel.
Modesty prevents these photos being shown especially the one of Phil displaying his dexterity...... 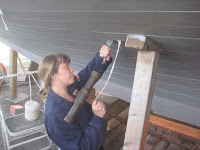 Duncan also caught the mood of the occasion and joined  the caulking crew.Shipwright Dave gave him a crash course and let him rip.
Duncan is now a remedial caulker showing potential ! He just needs to learn how to work and talk at the same time. Luckily his tea making skills are legend. 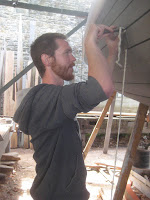 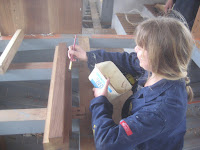 Sally then helped Dave to epoxy and varnish cabin pillars before final fixing.
Each Wednesday evening Sally then drives  home to Cheshire.
Helen II has a strange hold on us all.