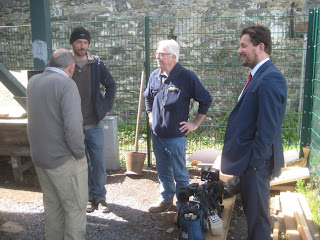 It was another exciting day in the life of Helen II.

Last week cameraman Malcolm Barron was on the quay filming an election article for ITV Wales.
Afterwards Wednesday Phil invited him to view our boat and he was so fascinated he said it might  make an interesting piece for TV.

He must be a big cog in the TV world.... because six days later Rob Shelley, another big cog, rang to ask if they could come to film today.

The rush to the mirror was unseemly .Hair laquer expenses soared and the team all grabbed their elocution C D's
Murray and shipwright Dave explained the history of the vessel prior to filming, to Malcolm and Rob  while a group of students from Llandrillo College came to  assist in caulking the boat. 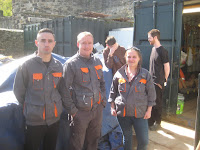 Cas Kenworthy and Lee Edwards set to with a will and impressed us all with how quickly they learned the technique. 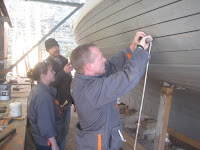 They said they might come again if college allows!


Shipwright Dave was filmed teaching them the skills of caulking. 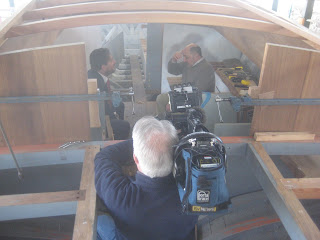 Murray Taylor did a piece to camera to highlight the work inside the hull.

Wednesday Phil was interviewed up a ladder showing work done and featuring a disproportionate rear end.
I could sue for that shot!!!

Duncan discussed the lines of Helen II and her naked beauty .I'm sure he's on something!

And by dinner time all was done and elation gave way to calm resolve to continue the task. 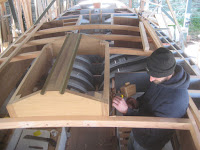 Shipwright Dave prepared the supports for the cabin skylight.
Apprentice Dave came out from his hiding place to create the starboard (right)skylight half beam.
Phil continued caulking... alone.
And all the other starlets disappeared.
That's life . 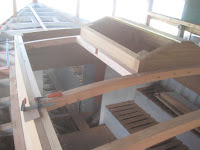 And the final view at the end of an exciting day.
Thanks to Malcolm Barron and Rob Shelley for being such nice
BIG COGS !
Posted by Wednesday Phil at 13:14