And Then Came The MARITIME MIDWIVES

(They've berthed more ships than they can remember !)

The team of volunteers, who have come to help finish the boat, have come from around the country under the watchful eye of team leader Jeremy. 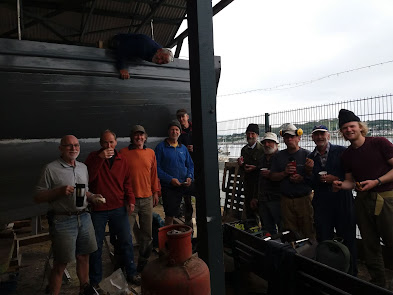 The team is made up of  eleven volunteers, or as Jeremy puts it "conscripts"
Ian and Tony work together  as sanders and finishers .
Mike and Gordon are electricians
Francis and Malcolm are engineers
Jay and Andy are plumbers
Paul and Mick are carpenters.
They have volunteered for work together for 10 days to hasten progress on Helen II
and have promised not to fall out , swear (much), and only stop for coffee or rum. (it's brown and in a big jug !) 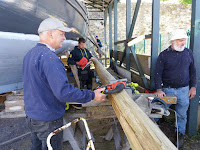 Tony ,Alister and Ian began work on finishing the planing of the mast. 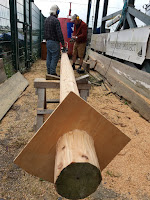 To achieve the necessary round shape they created a template to check thickness along its length.

Once completed ,they oiled the wood to seal it - only to find they needed to take more off as someone decided it was too thick.(this is called a learning curve ) 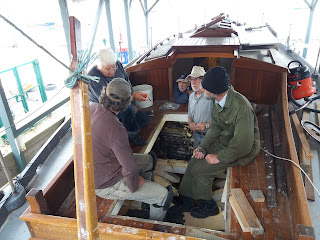 Trustee Ron and the rest of the team had a long discussion re the positioning of  all the necessary internal items and once all was agreed ,they set to work in their own fields of  specialism . 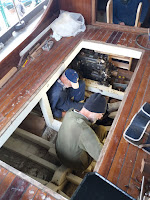 Francis and Malcolm began final fitting of  the engine onto the beds and a lot of technical stuff Wednesday Phil didn't understand ! 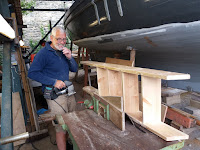 Paul set to making a new pair of steps for the entry to the cabin which will clip on to the cockpit  lip. 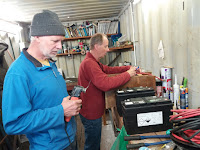 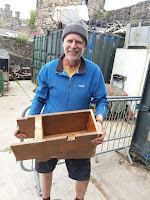 Jeremy found a better use for the saw and made one of the battery boxes. 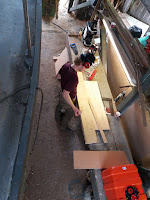 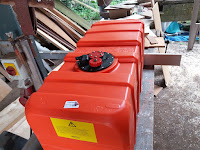 Nick was" home alone" creating a box for the 120 ltr fuel tank which is to be housed in the stern section. 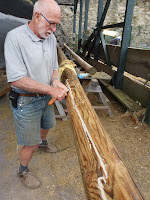 Jay got the unenviable task of filling the cracks of the drying mast with very messy putty but he didn't complain  'though, he did eat his sandwich with care as Phil didn't supply any soap !

.Wednesday Phil and Ron are so pleased with the pace of the work and are amazed and the daily  progress after only two and a half days..
On behalf of all the trustees its a BIG THANK YOU  to the  MARITIME MIDWIVES.
( KEEP DELIVERING !)
Posted by Wednesday Phil at 13:10