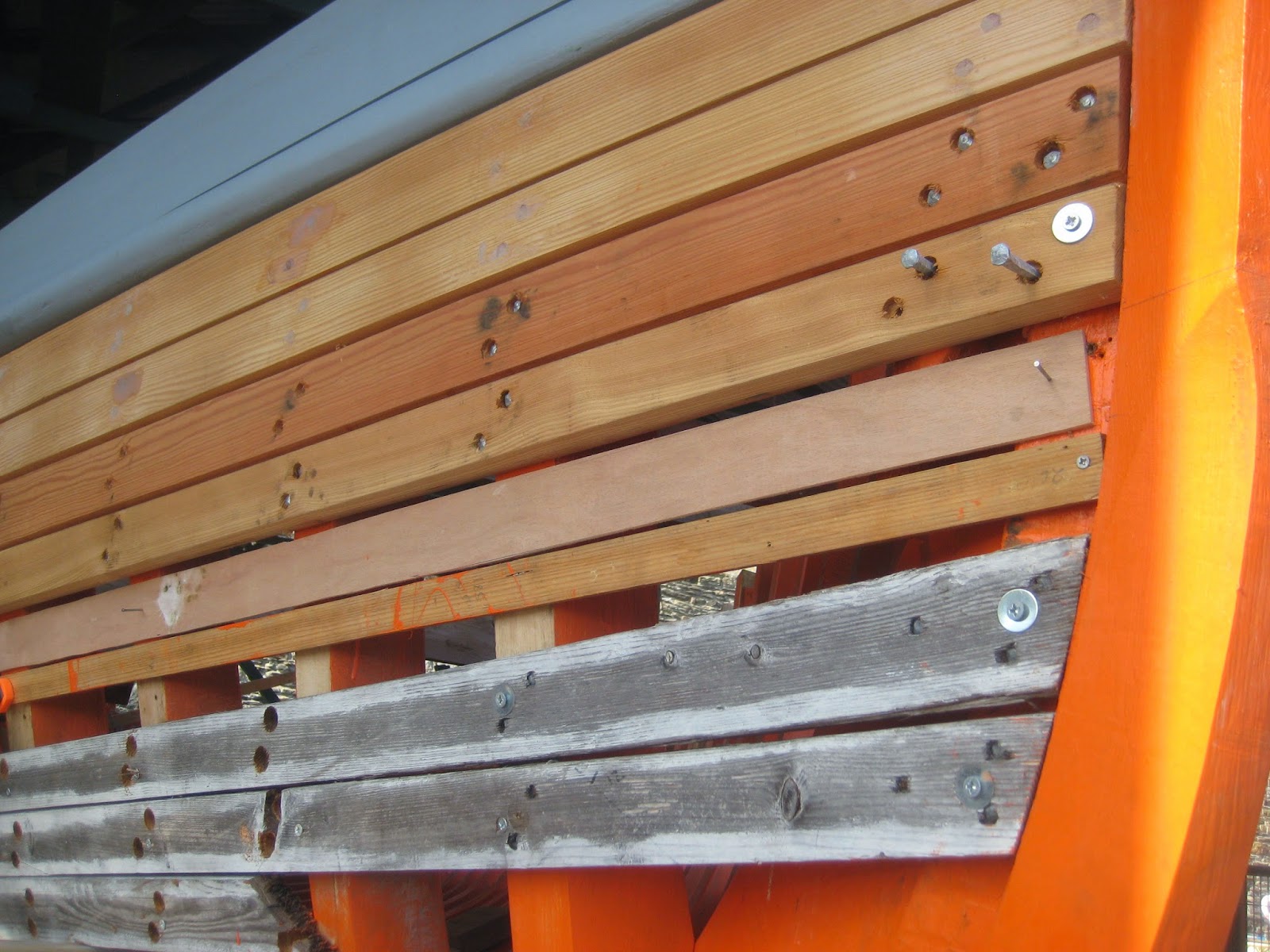 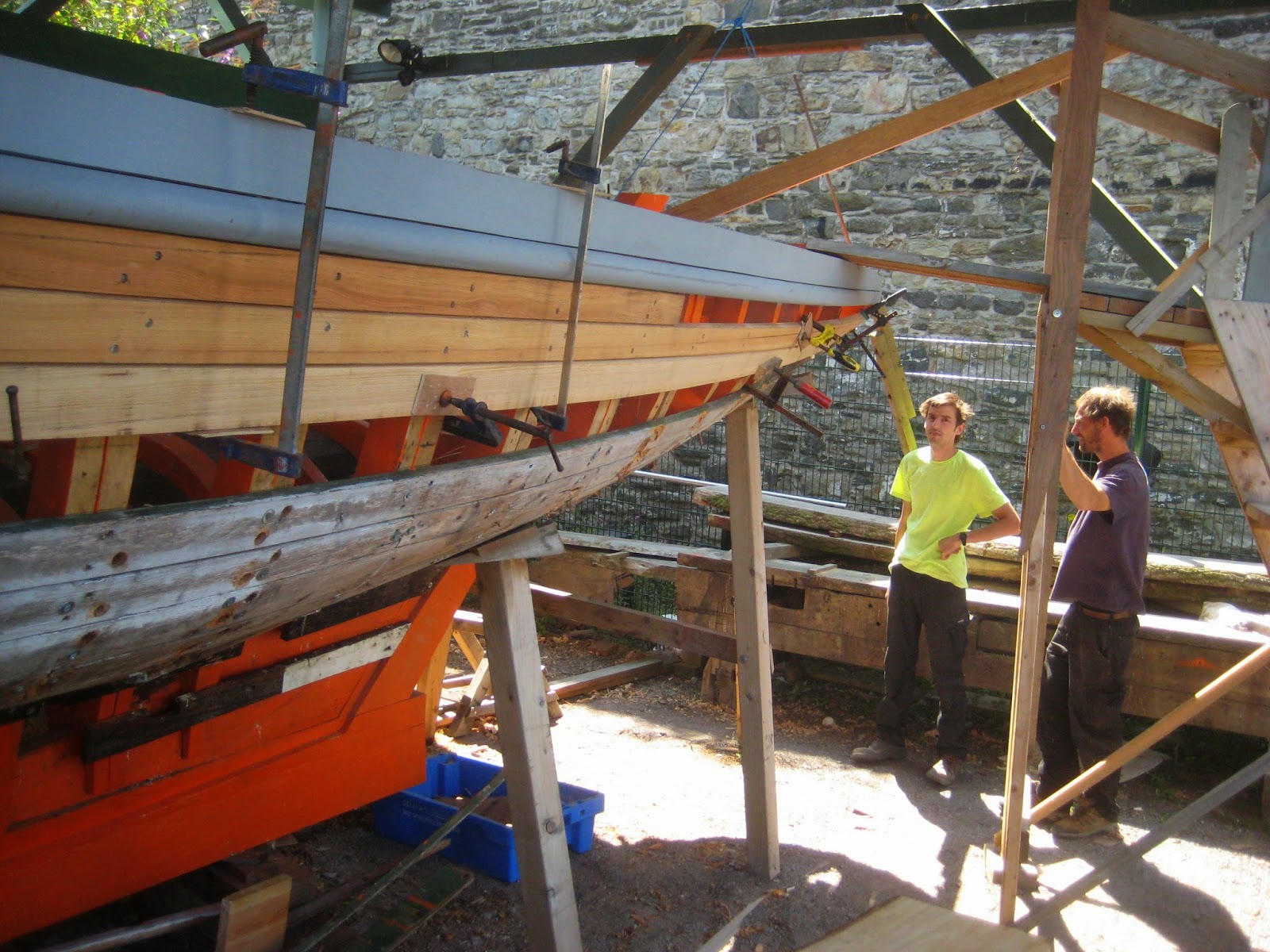 Having reached the fifth plank,Dave the shipwright decided to stop the planking as we now needed to begin planking from the keel (bottom) up.By doing this the last and final plank would be fitted in a easy to get at position.This final one is called the stop plank.
In order to begin working from the keel up ,it was considered desirable to have larch slabs of approximately 26 foot. This means that there will not be a join in this important position. At present we were making planks from 20 foot slabs of wood.Each full plank run from stem (front) to stern (back) could be made of 3 sections .The reason being that all the plank joins could not occur on the same frame (rib) as this would create a very weak area in the boat's structure. Each join was positioned three frames away from the join  above. Any join was then strengthened by a block placed behind the join and secured with 6 stainless steel bolts.

In order to cut these extra long slabs of larch, Adrian ,at Elwy Wood Welsh Timber saw mill, had to extend his saw rail by 10 feet. The purchase and construction of this bit of kit , and the necessary extension to his milling shed has taken some time. Sheds don't grow on trees.........
although Adria's did ! 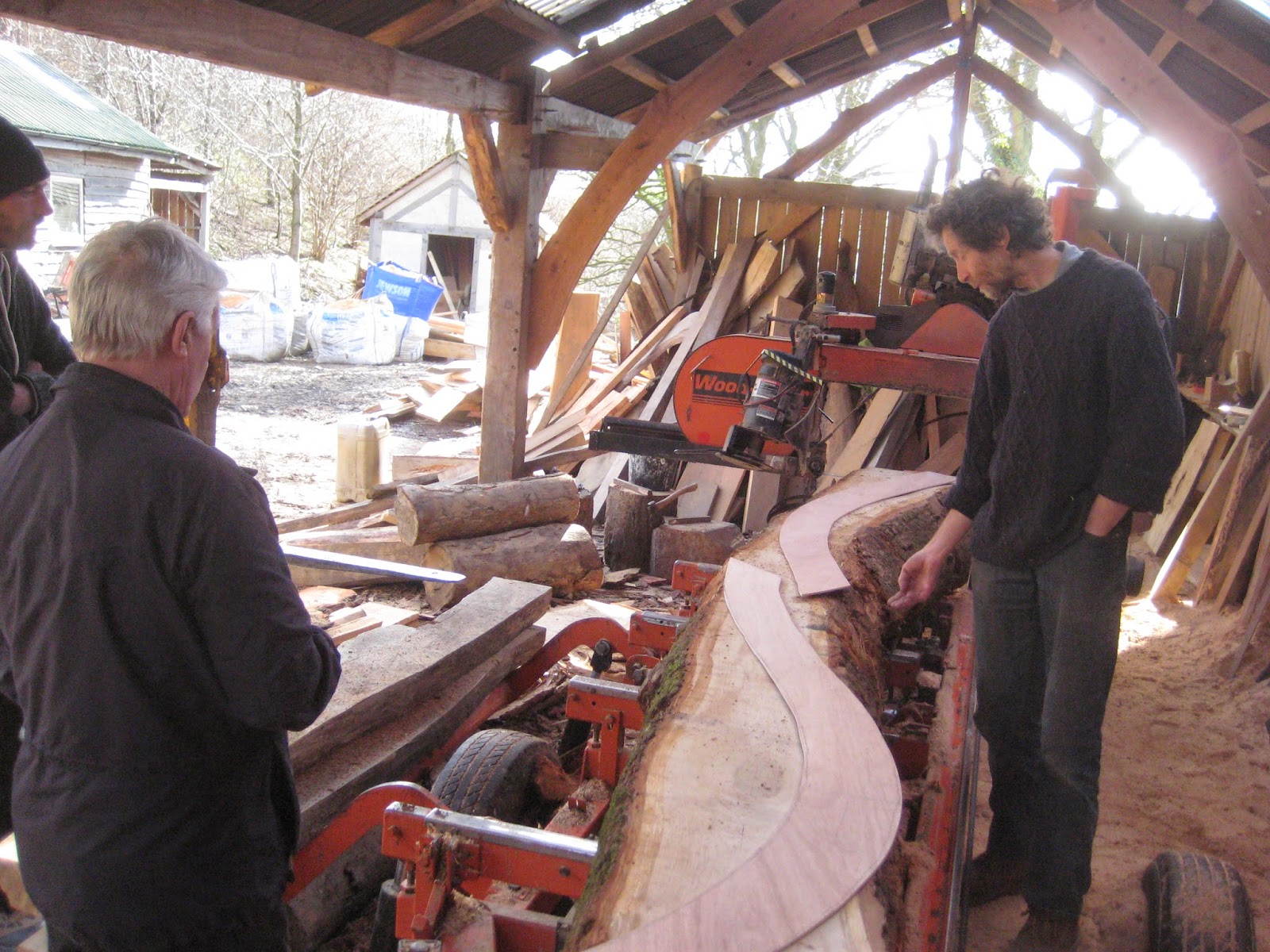 His shed remains a work of art.
.
While we waited for first delivery of the longer length slabs, work began on the inside of the boat. 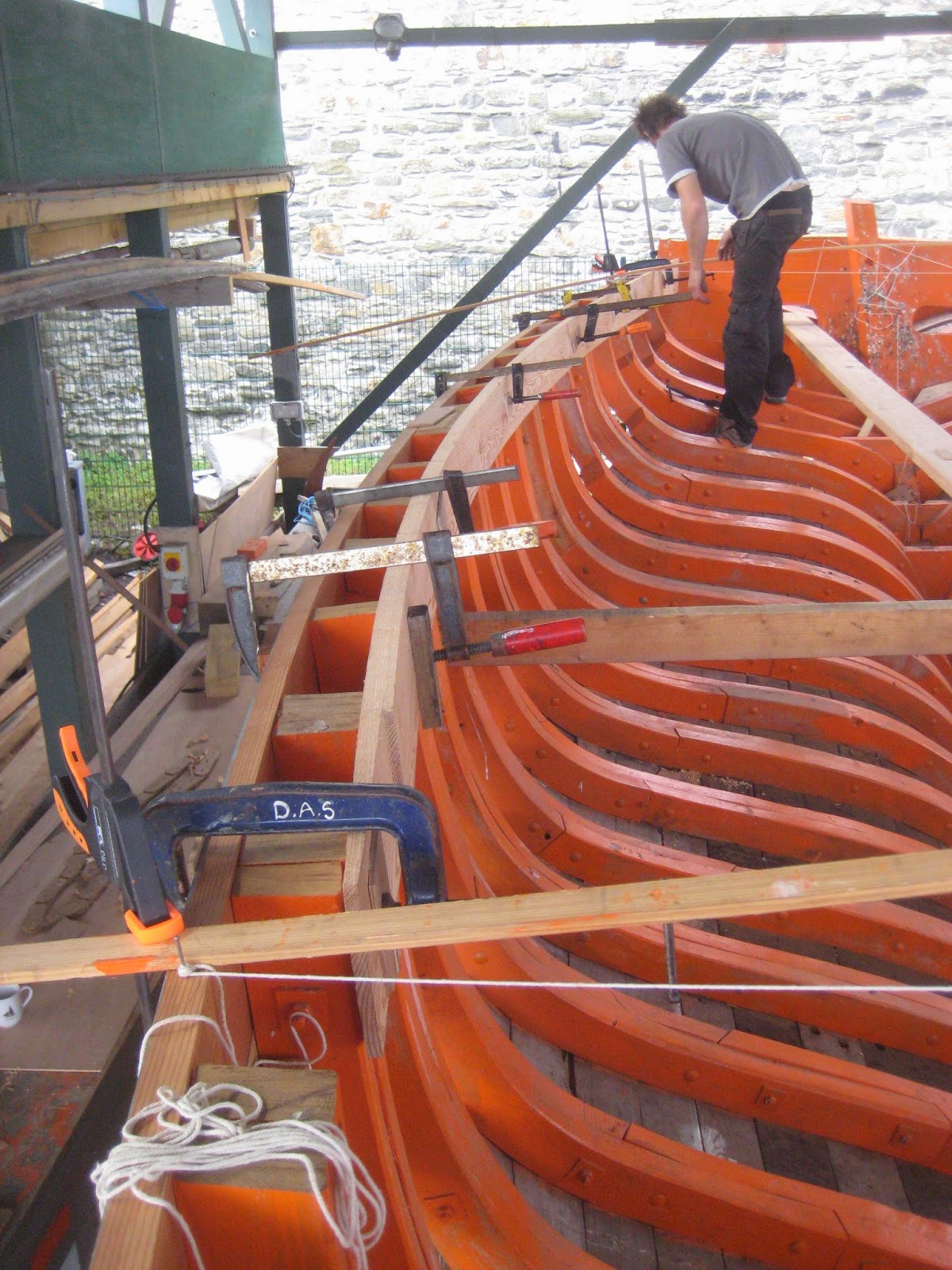 The first internal plank is called the sheer clamp and this lies parallel to the sheer plank (topmost plank ) on the outside.This provides added strength and a fixing point for work to begin on the decks.The picture on the left shows the first part of this sheer clamp being "G clamped" into position.Once the Daves (shipwright and apprentice ) were happy with the line and height of it , it was secured and the next portion added.
The art of head rocking to port and starboard ,squinting and muttering while looking at a plank's position was duly passed from master to apprentice.( In other mammals this looks like a mating ritual ) 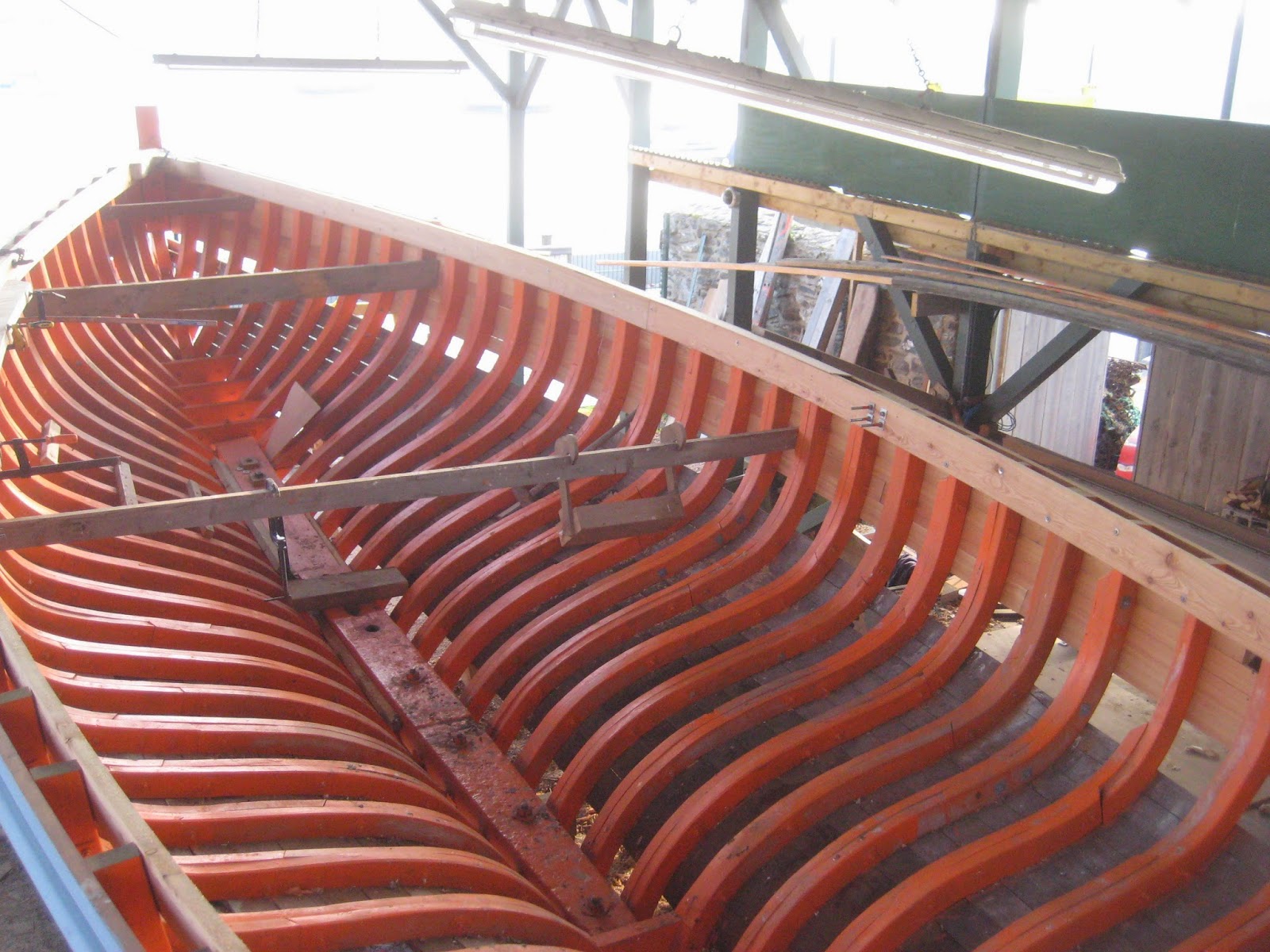 The photo on the right shows both sheer clamps in place.